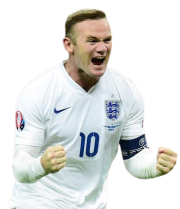 As England's record outfield cap-holder and goalscorer, it's fair to say Wayne Rooney will go down as one of his country's all-time greats.

The Liverpool-born striker began his career with boyhood club Everton and after appearing for England's U17s and U20s, he was fast-tracked into the senior team after bursting onto the scene in the Premier League at Goodison Park.

He made his debut against Australia at Upton Park at the age of 17 years and 111 days to become the youngest senior England player and he was an almost ever-present after that until he announced his international retirement in August 2017.

After his debut, he became England's youngest goalscorer when he netted against Macedonia in his sixth appearance as he helped the Three Lions to qualify for Euro 2004.

It was in that competition in Portugal where he secured his tag as one of the world's most exciting teenage talents when he scored his first major tournament goals, with a brace against Switzerland and he bagged again against Croatia.

By now, he'd secured a switch to Manchester United where he went on to win every domestic honour in the English game as well as the Champions League in 2008.

Despite featuring at the World Cups of 2006 and 2010, he had to wait until his third Finals of 2014 to register his first goal on that stage, when he scored against Uruguay in the group stage in Brazil.

The caps and goals kept flowing though, he celebrated his 50th cap against Ukraine in 2009 with a goal and then took the armband for the first time against Brazil in Doha later that year.

He was named as the permanent England captain by Roy Hodgson following Steve Gerrard's retirement in 2014 after the World Cup in Brazil and proceeded to lead his nation to the next Euro Finals in France two years later.

It was during the qualification phase for that tournament when he broke Sir Bobby Charlton's long-standing goal record, by registering his 50th goal for England from the penalty spot against Switzerland at Wembley in September 2015.

He went on to score three more goals after that before calling time on his international career in August 2017, following his return to Everton.

- Wayne Rooney won 120 caps for England between 2003 and 2018, a record for an outfield player in the history of the English national team.

- Rooney is England’s all-time leading scorer, scoring 53 goals in his 120 internationals, breaking Bobby Charlton’s record of 49 in 2015 against Switzerland. Harry Kane has since gone into second place with 50 goals.

- In February 2003 against Australia, Rooney broke the record for youngest ever player to play for England which had stood since 1879, playing aged 17 years and 111 days. That record has since been broken by Theo Walcott in 2006, but Rooney remains the youngest player to start a match for the Three Lions (17 years, 160 days vs Turkey in April 2003).

o Rooney is England’s youngest ever scorer, scoring against Macedonia aged 17 years and 317 days in September 2003. He is the only player to score for England before the age of 18.

- Wayne Rooney scored six goals in ten matches for England at the European Championships finals, including four at Euro 2004 as an 18-year-old, the only teenager to score for the Three Lions in that tournament and only the second at a major tournament, along with Michael Owen at the 1998 World Cup. Only Alan Shearer has ever scored more goals for England at the Euros than Rooney.

- Although he scored 53 times for England with ten braces, Rooney never scored a hat trick for the national team. No other player has scored more than 30 times for the Three Lions without also netting a hat trick at some stage in their international career.

- Of the nine players to win 100 caps for England, Wayne Rooney is the only one of those who won his 100th cap before the age of 30, playing against Slovenia in November 2014 aged 29 years and 22 days.

- Rooney is England’s fourth highest scorer at Wembley with 19 goals in 37 appearances there.

- Rooney won 32 matches at Wembley, the most of any player for the Three Lions, ending on the winning side in 86% of his games there for England (32/37).