Take part in our interactive video below and discover how sin bins will encourage respect across grassroots football.

Need to know more about how sin bins work? Look at our online sin bin guide.

WHY AND WHAT ARE SIN BINS?

In March 2017, the International Football Association Board (IFAB) gave all National Associations the ability to implement Temporary Dismissals – more commonly known as sin bins – at the grassroots level of the game. We chose to focus on matters of dissent to improve the match day experience and in support of the Respect programme.
In 2016/17 season there were over 73,000 cautions for dissent – making up around 25% of all cautions. With this in mind, we decided to pilot sin bins across all types of the game at Step 5 and below of the National League System and Tier 3 and below of the Women’s game in a bid to reduce levels of dissent. In total, 31 leagues have used the system over the past two seasons.
During this period, we saw a 38% reduction in dissent across the selected leagues. It also showed a reduction on dismissals for receiving a second caution in a game and abusive language. A survey carried out to obtain feedback from around 1,400 users showed that:
72% of players wanted to continue with sin bins
77% of managers/coaches wanted to continue with sin bins
84% of referees wanted to continue with sin bins
The pilot has shown that participant behaviour/match day experience has improved. It also showed players self-policing the game to prevent their colleagues from getting into trouble.
This is not a matter for The FA as IFAB only permits the use of Sin Bins at grassroots level. We initially trialled sin bins across various leagues at Step 7 and below, and after a successful trial period we are now rolling it out across all leagues at grassroots level, including at youth level.
Dissent – by word or by action – which is a behavioural matter rather than a football matter. By reducing dissent, we hope to improve the retention of referees while improving the image of the game.
Dissent can fall into two categories, either via word or action in the opinion of the referee.

10 minutes in adult football and eight minutes in youth football.
The referee will monitor these issues simultaneously. Our research of over 135,000 matches showed that less than 1% of matches have more than three cautions for dissent. The chances of those occurring in the same 10-minute period are remote. However, by following the correct caution procedure, the referee can manage multiple players in the sin bin.

All cautions for dissent must be dealt with by the sin bin process. The referee will signal this by issuing a yellow card in the normal way and pointing to the touchline where the player must go. It can only be administered to active players who are participating.
Substitutes or substituted players will be cautioned for dissent, as per the ‘usual’ process that currently applies across football. As from this season the laws have been amended for red and yellow cards to also be applied to technical area occupants – but this is separate to the sin bin process.

PLAYERS RE-ENTERING AND LEAVING THE FIELD OF PLAY

If a player receives two sin bins but commits no other offence, they can be substituted.
Yes, goalkeepers are covered under the same law as other players and can go into the sin bin. Much like when a goalkeeper is sent off, any other player must go in goal but the team must remain with 10 players. Upon returning, if during play, the goalkeeper can become an outfield player, and then return to being the goalkeeper during the next stoppage in play.
Yes, at the end of the sin bin time, a substitute can take their place rather than the player in question returning to the pitch, providing they have not used all of their allocated substitutions.
Yes the caution tally would include any sin bin offence

Players will not be required to pay the administration fee for going into the sin bin as the punishment has already been served during the match for a single sin bin offence. Administration fees will still apply to all other cautions and send offs.

We want to encourage better behaviour to improve the match day experience for everybody involved. This isn’t a financial matter and England Football continues to work with CFAs to ensure they have the resources necessary to support their clubs. Repeat offenders will also be fined £25 as well as a one match ban. 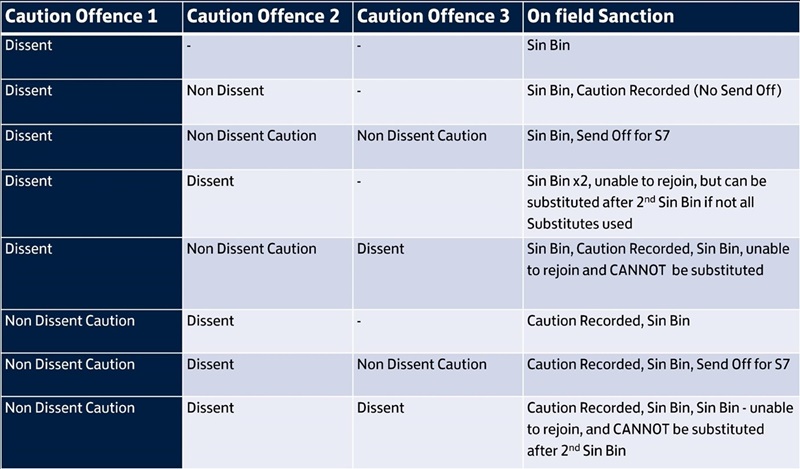 Make Respect part of your game. Enrol for free.

What is discrimination? How can you report it? What will we do?