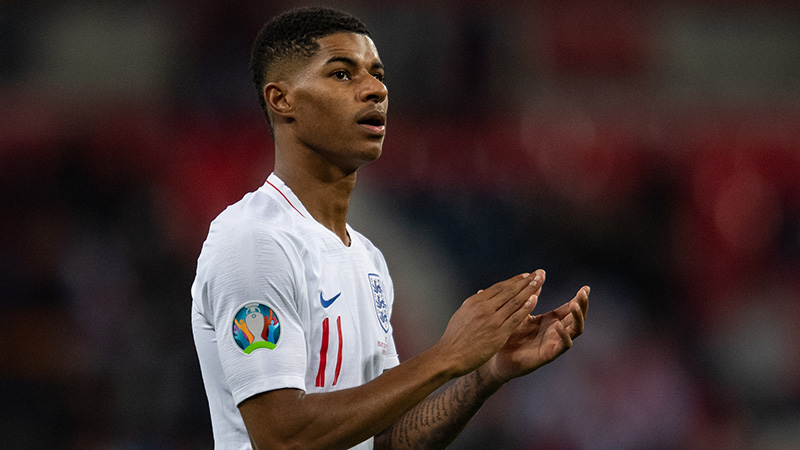 Bio Stats
"We've got to try and take the next step now and see if we can do something really special."

The Manchester United hotshot enjoyed a whirlwind rise to the top in the 2015-16 campaign, when he came swiftly through the ranks with both club and country.

It all started with a brace on his debut for his hometown club after being thrown into the United line-up to face FC Midtjlland in the Europa League by then Reds boss Louis Van Gaal following a string of injuries to the forwards in the Old Trafford squad.

If that first opportunity wasn't taken, then the Wythenshawe-born ace made sure he was in the squad to stay as further debut goals followed in the Premier League and FA Cup.

Rashford had been involved sparingly in the England set-up prior to that, featuring for the MU16s in the Victory Shield along with a couple of caps at MU18 level against Poland but his form with United led to an MU20s appearance against Canada in March 2016.

His strong performances with United continued after that and catapulted him into Roy Hodgson's senior reckoning, when he was included in the provisional squad for EURO 2016.

A senior bow followed in a friendly with Australia in Sunderland, when he also notched another debut goal within minutes of the kick-off, and he was duly selected for the final squad for EURO 2016 in France. All of this came less than four months after his breakthrough at Old Trafford.

Another debut goal came for the MU21s in September 2016, when he bagged a hat-trick against Norway in Colchester in what proved to be both his and Gareth Southgate's last game with the Young Lions.

A pacy, hard-working and skilful player, Rashford hasn’t been far away from the Three Lions squad since then and is a player who loves to get the crowd on their feet with his direct runs, ability to beat players and explosive finishing.

Since then, the softly-spoken striker has become one of the key men in Gareth Southgate's squad, leading by example both on and off the pitch, where his profile has grown immensely.

His charity work brought him to national attention, by helping to raise millions for charity FareShare during the COVID-19 lockdown and also writing a letter to the Prime Minister urging the Government to reconsider not supplying meals for under-privileged children during the summer of 2020, a decision which was eventually overturned.

And that work saw him rewarded when he was named as an MBE in the 2020 Queen's Birthday Honours List.

Rashford and Wretch link up

Marcus Rashford and Jesse Lingard return for a second episode of Roommates, where we find out Marcus's new nicknames and what Jesse would be if he wasn't a footballer. Who will win this time round?