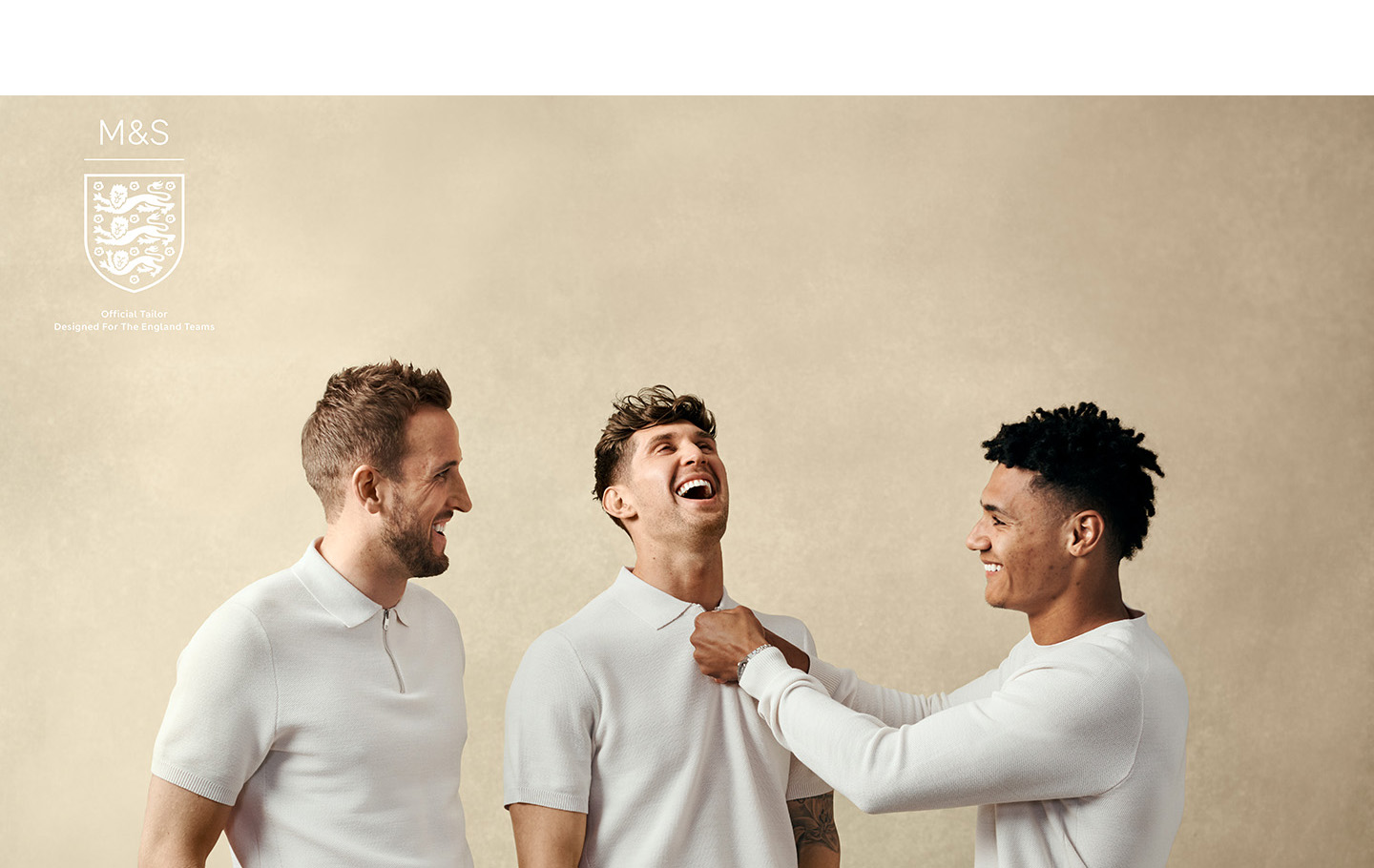 This partnership with M&S champions in-house designed collections across men’s & womenswear, which will be worn by the England Teams and available for customers to shop from August.

With so many credible and inspiring role models across the England Teams, led by such principled managers, it’s easy to understand why fans have reconnected with England. Both style and football can be exhilarating when players and people are expressing themselves. This formalwear partnership is a call to action and a celebration of individuality, creating a collection that’s more approachable, diverse and relatable - bridging the gap between the players and our valued customers.

To coincide with an exciting tournament schedule ahead, M&S kick off proceedings with the launch of its menswear collection, available online and in selected stores from the 18th of August. Precision design meets with performance innovation to deliver exceptional excellence within this versatile, clothing collection. Reflecting the personality and individuality of the England Team.

Gone is the standalone three-piece suit and tie, updated with a considered edit of smart-separates, styled how people want to wear them now - more relaxed, more interesting, and more England. Ranging from performance separates, knitwear and suiting, to footwear and accessories.

The menswear design team have worked hard to integrate both style and comfort when creating the collection, underpinned in its entirety by innovation and sustainability. A tonal palette of navy and black is complemented by neutral separates in ecru and air force blue for a considered and contemporary aesthetic. Styled with accessories which hero the England crest and signature vibrant red, synonymous with the England Teams. Tactile wool fabrics sit alongside soft cottons and contrast luxe velvet and satin eveningwear, for a collection that will take you from the everyday, to the extra special. Hero styles include double and single-breasted jackets, the performance trouser with 4-way stretch, relaxed half zip polos and the bomber and Harrington jackets.

Wes Taylor, M&S Director of Menswear, said: “After meeting with The England Senior Men’s Team and discussing their needs, it became apparent almost immediately that they wanted a collection which delivered on style and versatility, allowed for individual preferences but still came across as a cohesive look. Importantly, they wanted something that better reflected who they really are. So rather than structured suit, shirt and tie “uniform” we’re used to seeing we’ve created a more extensive smart separates collection that places comfort, performance, and sustainability at its heart.”

Key sustainability attributes include cotton sourced through the Better Cotton programme, the use of natural fibres such as wool (woven in UK mills), merino wool (responsibly sourced) and the use of recycled materials such as recycled polyester. Key innovations include stretch cotton, StormwearTM and Cool ComfortTM patented technology, moisture wicking, water resistant and wrinkle resistant fabrics and Dura Heel ™ technology - ensuring the players and our customers enjoy wearing the product whilst remaining comfortable.

The Womenswear collection will debut in 2023 ahead of an exciting summer tournament in Australia & New Zealand. Similarly, it will focus on a smart-separates aesthetic and comprise of a carefully considered collection of co-ordinating tailoring which will be available to shop online and in selected stores.

Maddy Evans, M&S Director of Womenswear, added: “We’re really proud of our partnership with The FA and incredibly honoured to be dressing the talented and inspiring England Senior Women’s Team. We’ve created a collection that feels contemporary and unexpected, with tailoring pieces that challenge the traditional idea of ‘power dressing’. We are redefining ‘smart’, making it much more relevant for the modern woman, with relaxed shirting and woven pop overs, slim and wide leg trouser options, all styled back with classic buckle loafers and versatile wardrobe staples such as the essential trench and car coat. We’ll be cheering the team on every step of the way!”

M&S launch its supporting marketing campaign online and in selected stores on the 4th of August, featuring six players wearing a selection of key styles from the collection. Including Harry Kane, John Stones, Ollie Watkins, Conor Coady, Declan Rice and Fikayo Tomori. Favourite designs amongst the team include the Harrington jacket and the DB wool jacket which champion the smart-separate aesthetic.

Anna Braithwaite, M&S Director of Marketing, commented: “After the recent success of both the men’s & women’s teams, it’s clear to see a new England has stepped forward. They’re focused, they’re ambitious and it seems as though we’ve entered a new era of football, with the entire nation swept up in the excitement. I’ve no doubt The England Senior Women’s Team’s performance this summer will inspire a new generation of footballers and that's only set to continue during the men’s tournament later in the year. As a brand, we couldn’t be prouder, and we’ll be behind our England Teams every step of the way. This 3-year partnership is an opportunity to continue our legacy as the Official Formalwear Partner to The England Teams, and we’re thrilled to finally share the news”

Navin Singh, our Commercial Director, added: “We are delighted to renew our partnership with Marks and Spencer and collaborate on a clothing collection that is reflective of our national teams. The FA and M&S are steeped in history, but this modern range aligns with our young, exciting, and relatable players. We are sure that the new men’s and womenswear will prove popular.”

MORE ON THE ENGLAND NATIONAL TEAMS