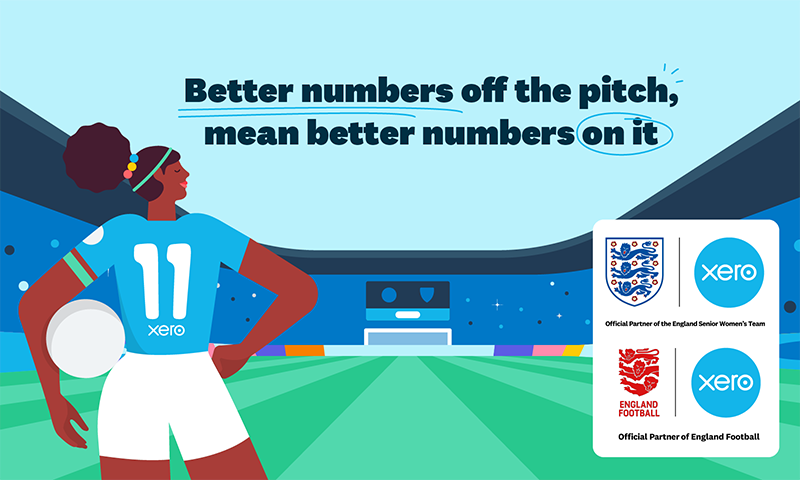 Xero to become the official partner of the England Women’s senior team and England Football.
The Football Association and Xero, the global small business platform, have today announced two commercial partnerships to champion women in football, highlighting the importance of financial viability in creating further opportunities on and off the pitch.

Xero will become the official partner of both the England Women’s senior team and England Football. Both partnerships go beyond brand placement, as Xero will work with the FA's Grassroots Team, County Football Associations and the FA Club Consultants to provide access to a comprehensive range of educational resources for clubs’ financial management.

Xero will also provide a platform for grassroots clubs to find and connect with local accountants and bookkeepers.

The partnership has been designed to ensure support for girls and women at both the grassroots and elite, with both organisations championing the importance of both levels and recognising one cannot thrive without the other

The announcement follows a series of partnerships from Xero as part of its support for women’s football more globally.

It has also announced a global partnership with FIFA Women’s Football earlier this year, covering the FIFA Women’s World Cup Australia & New Zealand 2023, which the Lionesses secured qualification for earlier this month .

Xero has also partnered with Lewes FC in East Sussex to help the pioneering club on its mission to drive greater equality in the women’s game.
John Coldicutt, marketing director for Xero, UK & EMEA, said: “We take great pride in partnering with the England senior women’s team. The future is bright for the women’s game but the financial viability of clubs at every level is vital to getting more women into football. We know that almost half (47%) of women’s football clubs state that they would benefit from support with the  financial management of their club*, so it’s our mission to help clubs with this, from a grassroots level up.

“The success of the women’s game at any level begins with local clubs and their communities. These clubs are not only small businesses in themselves, but are powered by them too - from caterers to transport firms and everything in between. We hope that we can reduce that financial management burden and help them focus on what really matters – getting more women and girls on the pitch.”

Baroness Sue Campbell, the FA’s director of women’s football, said: “After a memorable summer, we are delighted to welcome Xero as a significant partner in the England Senior Women’s team and as a supporter of England Football. This is an organisation who shares our commitment to women’s football at all levels of the game. It’s particularly pleasing that Xero join us with a desire to make a real difference at grassroots level.

"Grassroots clubs are the heartbeat of their communities and it’s important we promote them as a source of joy, camaraderie, education and health.  After a difficult few years the financial administration support that Xero can provide will help clubs attract and retain more people to play football. We’re grateful for their passion to positively impact the game on and off the pitch.”