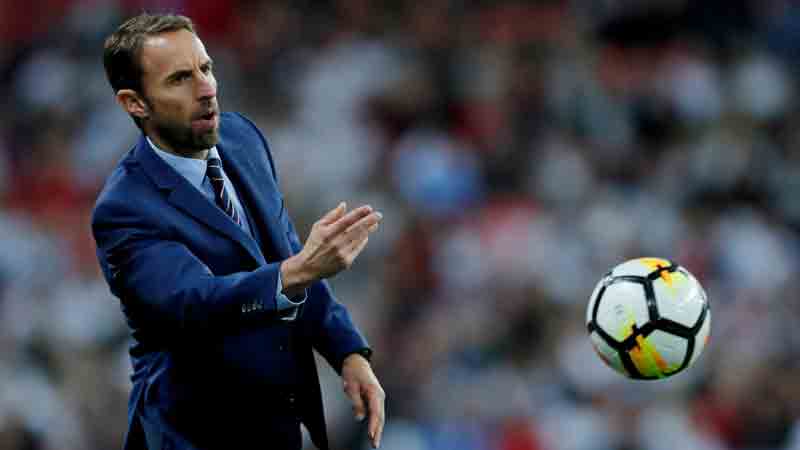 "I am exceptionally proud to have the responsibility of leading England."

Gareth Southgate was appointed as England men's senior manager in November 2016, following a successful spell as interim boss after the departure of Sam Allardyce the previous month.

He took on and oversaw the Three Lions’ World Cup qualification campaign, leading England to Russia 2018 with a game to spare while also tailoring the squad and outlook of the team to his liking.

And his Three Lions squad stormed to the semi-final of the World Cup, the first time an England team had been in the last four of a major tournament since he was involved as a player himself back in EURO 96.

Despite the heartbreak of a semi-final defeat against Croatia, England bounced back in their inaugural UEFA Nations League campaign to reach the Finals in the summer of 2019. They finished third there, following a semi-final reverse against the Netherlands and a shootout win over Switzerland in the third-place game.

England's ascent continued as qualification for EURO 2020 was secured over the next two years before he led out his squad on home soil to kick-start another summer adventure for the nation.

Southgate's men again captured the hearts of the fans, creating special memories with victories at Wembley over the likes of Germany and Denmark in the knockout stages on the way to being paired with Italy in the EURO 2020 Final.

Sadly, it wasn't to be for Southgate and his team as they were held to a 1-1 draw over the course of 120 minutes before Italy won the title after a heart-breaking shootout.

But it was another experience and step on the pathway for his charges, who will now approach the 2022 World Cup in Qatar and EURO 2024 in France with confidence,

Before his appointment to the senior team, Southgate had already worked with a number of the players in his role as England MU21s head coach, when he took over in September 2013.

During that time, he led his first Young Lions squad featuring the likes of Harry Kane, John Stones, Jesse Lingard, Jack Butland and Eric Dier, through an impressive qualification campaign to the UEFA U21 EURO Finals of 2015 in Czech Republic.

There was a tough exit for his team though, as they were knocked out after the group stage despite a victory over eventual champions Sweden.

He then moulded another group for a second EURO campaign, with players such as Jordan Pickford, Ruben Loftus-Cheek, Ben Chilwell, Joe Gomez and Dele Alli blossoming under his coaching and winning the Toulon Tournament in 2016 just months before his ascent to the seniors.

Southgate was no stranger to international football prior to his coaching involvement either, picking up 57 caps as a player.

Initially a midfielder after coming through the ranks at Crystal Palace and captaining the Eagles to the old First Division title in 1994, it was following a move to Aston Villa a year later that Southgate first earned international recognition.

He made his Three Lions debut in December 1995 against Portugal, under Terry Venables and quickly became a key player in the squad as a central defender as England went on to reach the semi-final of Euro 96 on home soil.

Southgate earned acclaim for his displays throughout the competition, only for his and England’s tournament to come to a brutal end after a penalty shoot-out defeat to Germany at Wembley, where his spot-kick was saved to cost the Three Lions a place in the final.

That moment didn’t define his England career though, as he went on to feature in three more tournaments such as the World Cup in 1998 and 2002 and Euro 2000.

On the domestic front, after six years and almost 200 appearances for Villa, Southgate headed north in 2001 to join Middlesbrough where, as captain, he led the side to their first major trophy with the League Cup in 2004.

It was with Boro that Southgate had his first experience of management too, taking over as boss in  the summer of 2006 following the departure of Steve McClaren to take over as England manager.

During his three seasons in charge, he led them to 12th place in the Premier League in his first season and continued to build on that in the following campaign before he left in October 2009 following their relegation to the Championship.

After taking time out to travel, visit and observe training and coaching methods at a number of different clubs in Europe following his departure from Boro, Southgate enjoyed an 18-month spell with the FA as head of elite development.

During this time, he worked with young players in England’s development teams and also helped oversee changes in grassroots football with the aim of helping young players improve their technical skills.

Now, many of those players who he may have first helped during that time find themselves trying to impress again for the England senior team.