'I could not be prouder to be part of this team’ 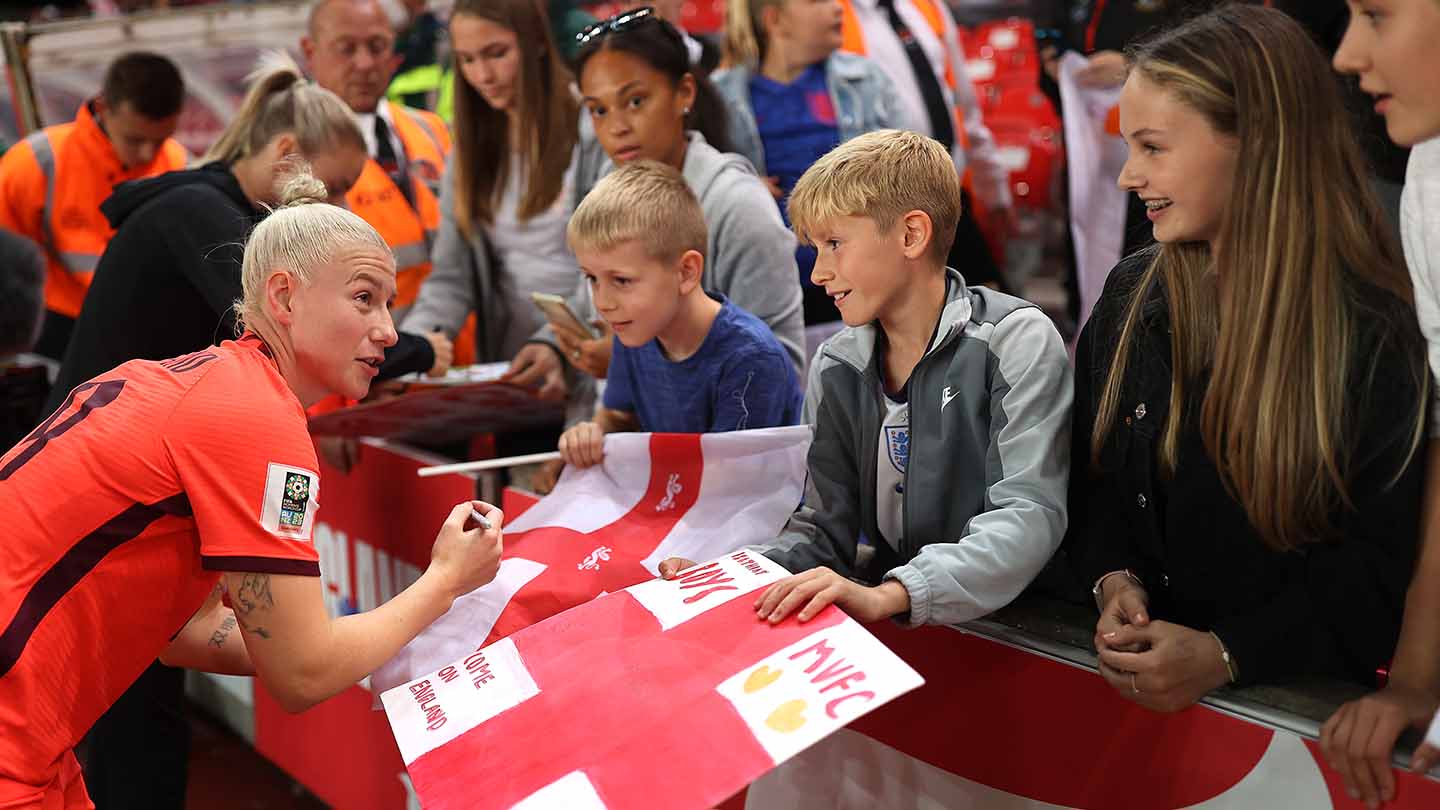 Beth England stressed she ‘could not be prouder to be part of this team’ after bagging twice in England’s final World Cup qualifier against Luxembourg.

The clinical striker was part of the Lionesses squad which lifted the UEFA Women’s EUROs trophy but with Ellen White starting each match and Alessia Russo having a huge impact from the bench, England was one of the players who did not feature in the tournament.

However, the togetherness of the group was evident when the final whistle went at Wembley Stadium connected by EE after the EUROs Final with Germany, as it was England who was first to celebrate with head coach Sarina Wiegman.

The Chelsea striker did get her opportunity against Luxembourg though as she scored twice after coming on at half-time in the 10-0 victory at Stoke.

She said: “I think we knew coming back after a big summer like that that we had to show off. I think we did well against Austria and we just wanted to continue that good form.

“I’m absolutely buzzing [to get two goals]. It was a tough summer for me individually but it is a team sport and I could not be prouder to be part of this team.

“Even just one goal I was chuffed with, so to get two at the end and make it ten – yeah I’m really happy.

“I didn’t hear the crowd shouting [we want ten] but we’re just buzzing with ten goals.”

And England added: “It was always going to be tough after Ellen White. She was a phenomenal player who led the line tremendously for a number of years.

“I’m so proud of the impact Alessia made during those EUROs.

“I know it is tough [to fight for a place] but we fight for each other and do what we can when we’re on the pitch.”

England’s 2023 FIFA Women’s World Cup qualification campaign could not have gone much better, with the Lionesses scoring 80 goals and conceding none during their ten matches.

The last of those was against Luxembourg tonight, as the home side recorded the same scoreline as in the reverse fixture back in September, which was Wiegman’s second game in charge.

The head coach, who was presented with her UEFA Women’s Coach of the Year award before the match, said: “The difference between the teams was so big that it means you have to make the game yourself, particularly the tempo.

“But I think we played well and scored some great goals. Some of the things we wanted to do as a team, like playing one-touch with cutbacks, we did. It was nice to see and I hope the people enjoyed it too.

“It is hard to keep the tempo up in these games, so at the end we slowed down a little bit, but then we also got two goals right at the end.

“Overall, the whole qualification series has gone really well. Of course there are always areas to improve, but that comes in big games. Games like this you know you’re going to win before, but you always have to work hard and never take things for granted, [even if] the difference is so big.

“Next camp we have a very good opponent to start with in the USA, so against them in transition and defence we’ll have to do really well.”