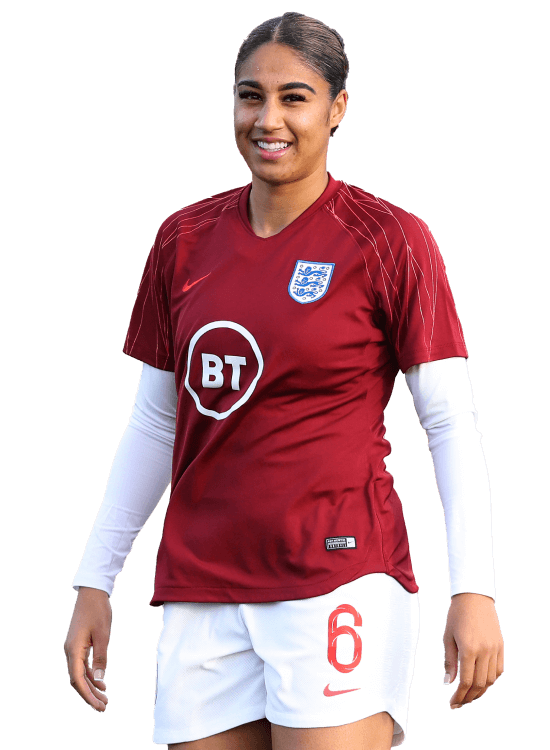 Gabby has been an England regular throughout the development ranks over the years, collecting caps at WU17, WU19, WU20 and WU23 level after impressing with Everton.
During that time, she played in UEFA EURO Finals at U17 and U19 level as well as an U20 World Cup, which all gave her growing experience on the international stage.
Her first senior involvement came at the 2018 SheBelieves Cup in the USA and her debut came later that year when she featured in a 6-0 win over Kazakhstan in September.
A serious knee injury picked up in early 2020 saw her miss the best part of a year, but after fighting back to fitness and into the Everton team she returned to the England squad in April 2022.
Born in Wythenshawe, Gabby grew up in Manchester and first began playing in boys' football at the age of nine while also playing for Blackpool Girls and Manchester United's centre of excellence.
But it was after joining Everton in 2014 where she really found her feet, breaking into the first team at the age of 17 and even playing in the 2014 Women's FA Cup Final that season before going on to become the club's first-ever professional player in 2017.

It's fair to say that football is something that runs in the family, as Gabby's cousin is men's senior international Jesse Lingard.
NEWS & FEATURES WITH GABBY
7 min read
England Women's Senior Team

Gabby George 'very excited' and 'a little surprised' by recall

The England and former Everton teammates take each other on in this special challenge...