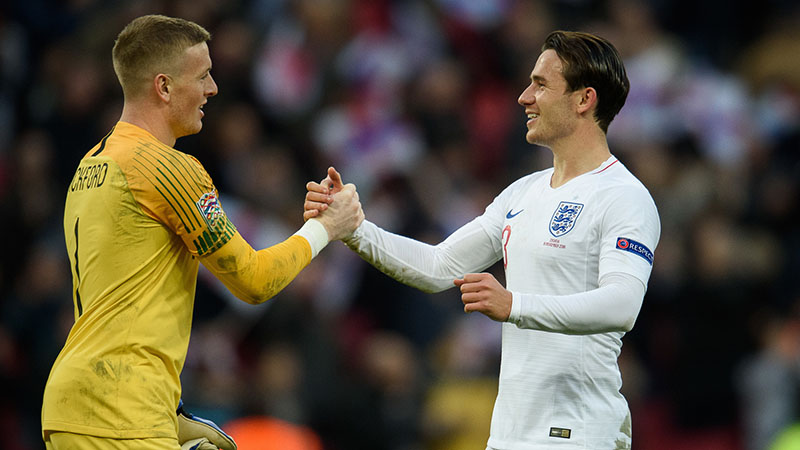 "Playing for England has been so important for me and an incredible experience. All of those games have helped me prepare for now, when you’re away from home for weeks at a time, you learn things and it’s about enjoying it as well."

If ever there was a player who has led by example in terms of collecting valuable experience on their pathway to the top then it’s Jordan Pickford.

The Everton goalkeeper had played in non-League and all four professional divisions in England via loan spells away from his boyhood club Sunderland before making his Premier League bow for the north-east club in January 2016.

He had also been a regular on the international scene prior to that, picking up experience through the Young Lions set up with caps at MU16, MU17, MU18, MU19, MU20 and MU21 level.

His full debut for the Three Lions duly arrived in November 2017 in a friendly against Germany at Wembley, and Pickford didn’t disappoint – keeping a clean sheet and impressing throughout in a draw against the then world champions.

From there, he never looked back and went on to become a key figure for the team during the 2018 World Cup in Russia, where his reaction saves and distribution of the ball made him a firm favourite of Gareth Southgate, who had previously managed him with the MU21s.

Pickford's performance in the first knockout game against Colombia saw him produce a string of stunning stops before he made the decisive save to deny Carlos Bacca's spot kick and help England win their first ever World Cup shootout.

A lively and infectious character in and around the squad, Pickford continued as the nation's first choice when the first-ever UEFA Nations League campaign began, with England going on to reach the inaugural finals in Portugal in the summer of 2019.

And he played a pivotal role in another shootout success, by both scoring and saving against Switzerland in the third place game to further cement his status as one of the country's best goalkeepers of recent years.

A Pickford point of view!