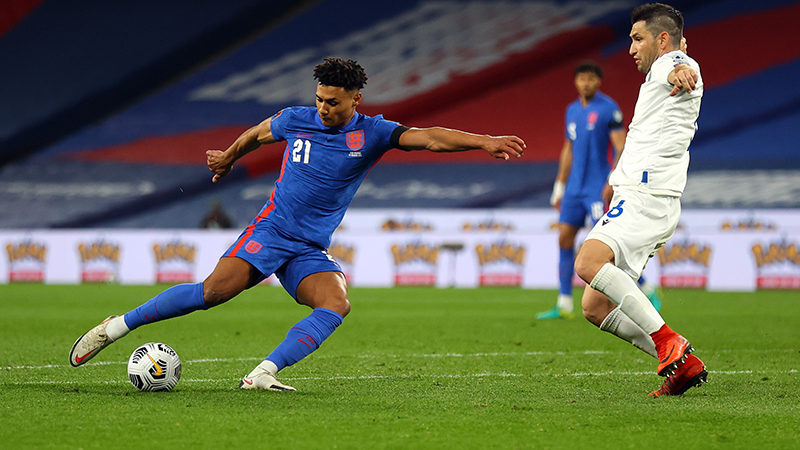 Ollie Watkins received his first international call-up at any level in March 2021, when he was picked for the squad to face San Marino, Albania and Poland in European Qualifiers for the 2022 World Cup.

And he had a debut to remember, as he came off the bench at Wembley to score his first England goal in the match against San Marino.

Watkins had caught the eye of Three Lions boss Gareth Southgate with his performances for Aston Villa, in what was his first season in the Premier League following a move from Brentford in the summer of 2020.

Hailing from Devon, the creative forward started his career with Exeter City, where he came through the youth ranks before spending three seasons in the first-team and earning a move to Brentford.

And it was at Griffin Park where he began to make a name for himself in the EFL Championship, scoring 45 goals in just over 130 games over his three seasons with the club before Villa swooped to add him to their ranks.

With his intelligent movement, good finishing and proving to be an excellent team player at the top level in England, Watkins will now look to take that onto the international stage.

The Three Lions got their World Cup 2022 qualification campaign off to an emphatic start with a 5-0 win against San Marino at Wembley Stadium. Goals from Dominic Calvert-Lewin, Raheem Sterling, James Ward-Prowse and Ollie Watkins, making his England debut, gave the Three Lions all three points.