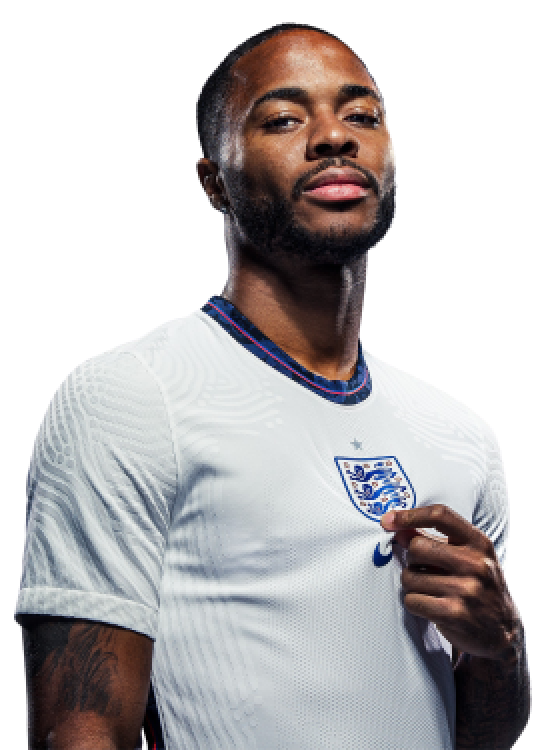 Bio Stats
"It's an honour to represent England. Growing up in Wembley, I remember the crowds going to watch, looking up as the Arch was built and hoping to play there some day."

After growing up in the shadow of Wembley Stadium and sporting a tattoo of the Arch on his arm, it’s no surprise Raheem Sterling finds himself at home at the national stadium.

He was first discovered playing for boys' club Alpha & Omega in north-west London by QPR, where his ability and reputation grew to the extent that he was said to be on the verge of a first-team call up at the age of 15 before Liverpool swooped to take him to Anfield.

And it was on Merseyside where he started to make waves, with his tricks, skill and pace putting him in the spotlight as he quickly broke through their academy ranks and into the first team under the management of Brendan Rodgers.

Sterling was also a regular face in England’s development teams after debuting in the Victory Shield against Northern Ireland in Chester before moving through into the MU17s, helping them to the U17 EURO Finals of 2011 in Serbia before he had his first taste of a World Cup at the U17 version in Mexico later that year, when he scored a stunning goal against Rwanda.

Alongside the likes of Jordan Pickford and Nathan Redmond, he helped John Peacock's Young Lions to reach the quarter finals before he moved into the MU19s and MU21s set up in quick succession.

Sterling soon worked his way up into the senior set up, and he made his debut in a game with Sweden in November 2012 under Roy Hodgson before returning to the MU21s under Gareth Southgate the following year to add more international experience.

A club-record transfer from Liverpool to Manchester City followed in 2015, where he began to work under Pep Guardiola and eventually helped the Blues to both a Premier League title and Emirates FA Cup success in 2019.

And since Southgate took the reigns of the England senior team in 2016, his influence in the squad and team has grown and he was a vital cog in the system used as the Three Lions reached the semi-finals of the 2018 World Cup in Russia and then the UEFA Nations League Finals of 2019.

Sterling's importance to England continued to grow and in 2021 he scored five goals in his 12 outings.

At EURO 2020, he was many people's player of the tournament as he scored the only goal of the game against Croatia and Czech Republic to ensure qualification out of the group stages, before bagging the crucial first goal against Germany in the last 16.

Not only has Sterling proved to be a vital player for the Three Lions on the pitch, he has also become a strong voice off it and has used his growing profile and platforms to speak out and highlight issues on racism and equality, which resulted in a deserved MBE in June 2021.

'I fell in love with football'

This is Football: Raheem Sterling

The England ace takes us back to his roots, growing up playing football on the streets of Wembley