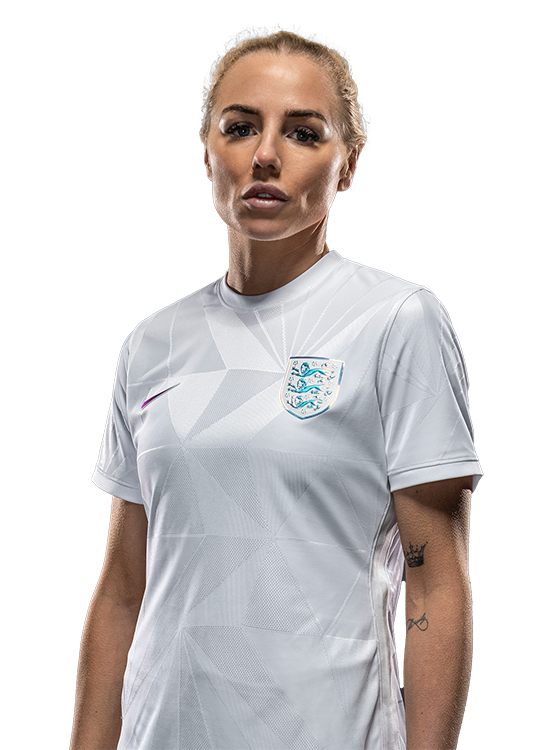 One of the most experienced members of England's victorious squad who became European champions in the summer of 2022, Alex provided vital cover and know-how when introduced from the bench at crucial stages of numerous games in the tournament.

A long-standing member of the Lionesses squad, after starring for various development teams, Alex Greenwood broke into the senior side at the 2014 Cyprus Cup – and had an instant impact.

With a clean sheet, an assist and a sumptuous set-piece delivery which led to another goal, the left-back played a key role in England’s 3-0 win over Finland. She came agonisingly close to capping her full debut with what would have been a memorable goal, but the crossbar intervened to deny her angled 25-yard drive.

That impressive performance laid the foundations for what has been a fruitful international career so far.

Aged just 22, Greenwood was the youngest member of England’s squad at the 2015 World Cup, where she started in the third-place play-off win over Germany which secured the bronze medal.

She also was a key member of the squad that helped England reach the semi-finals of EURO 2017 and featured in four of England’s 2019 World Cup qualifiers.

On the domestic front, Greenwood, who began her career at Everton, captained Manchester United to the FA Women’s Championship crown in 2019, before joining European champions Lyon that summer.

But in September 2020, ahead of the new Barclays WSL campaign she returned to England and her native north west by signing for Manchester City on a three-year contract.

Greenwood has been a mainstay under Sarina Wiegman, starring alongside Millie Bright in the centre of defence, and also helped the Lionesses win the inaugural Arnold Clark Cup in 2022.

Find out when you can see Alex in action for Manchester City in the Barclays Women's Super League and how to get tickets!