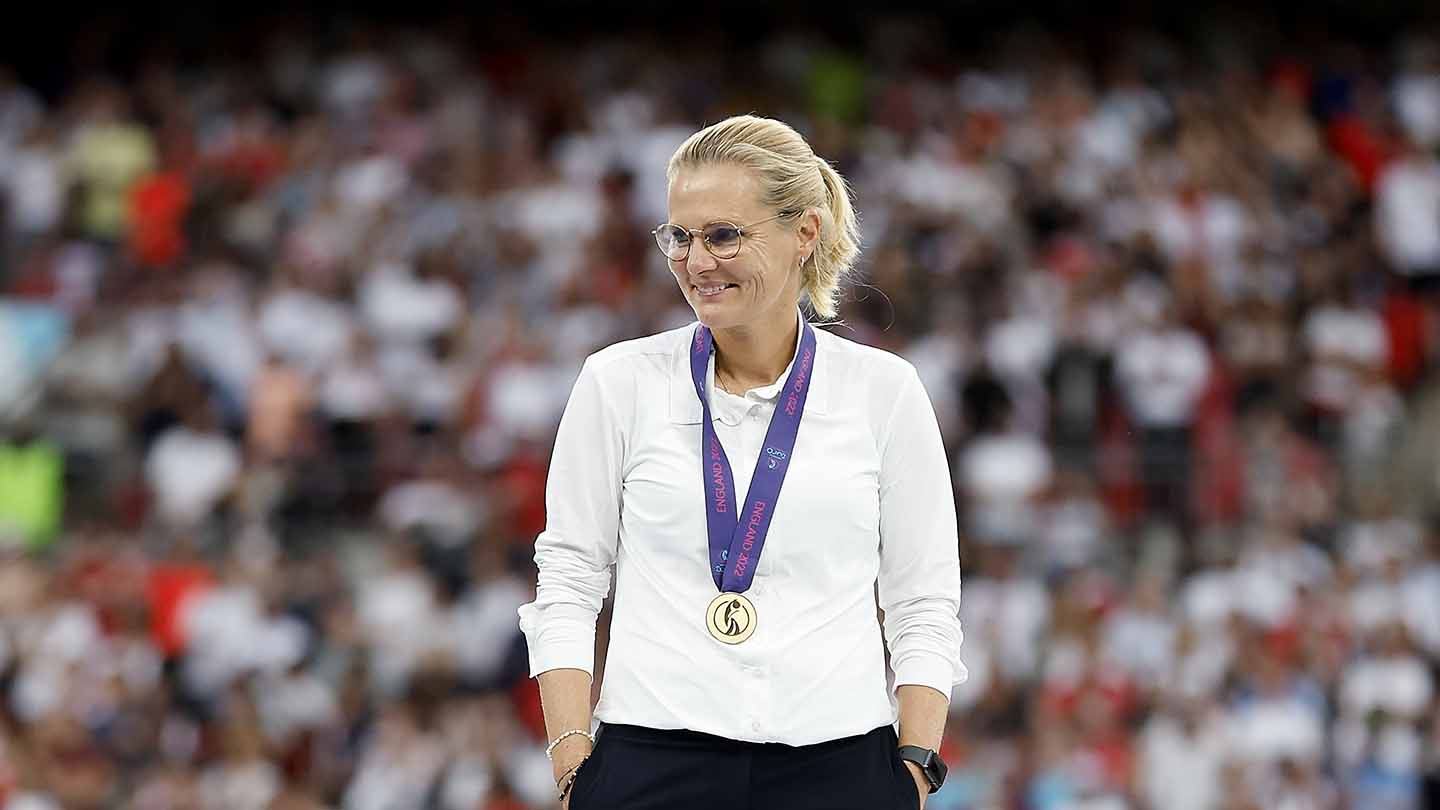 Sarina Wiegman has explained some of the key inclusions and omissions from her England squad for September’s FIFA World Cup qualifiers.

There are five changes to the squad which won England their first senior European Championships, with a combination of injury, retirements and a personal issue all contributing.

Three of the Lionesses’ most experienced players from the home EUROs will not feature against Austria on September 3 and Luxembourg on September 6.

The second most capped England international of all time, Jill Scott, and the Lionesses’ record goalscorer, Ellen White, have both retired this week, whilst Fran Kirby and Chloe Kelly – who scored the winning goal in the Final against Germany – have been ruled out with injury.

Goalkeeper Hannah Hampton will also miss out due to ‘personal issues’ and has been replaced by Sandy MacIver, who was part of the provisional EUROs squad.

On Kelly and Kirby, Wiegman explained: “They are ok. It has been a short time since the EUROs until now. Chloe’s injury is a small thing but it is too early to bring her in and to let her play. So she needs just a little bit more time and it is not too bad.

“With Fran, she has a little foot injury and it takes a little bit more time. I think she will be alright but it is too short [time wise] and she has not had any training at all so she just needs a bit more time and this camp comes a bit too early.”

Scott and White’s departure will be felt not only on the pitch but off it, with the pair hugely popular members of the squad.

Wiegman said: “It is hard to describe in words how much of an impact they have had [on English football]. First of all, they have been with the team for such a long time so they have impacted the game with their national team and club teams in England so much – with their personalities too.

“I have only worked with them for a year so I am a little disappointed that I cannot work with them for longer but I totally understand their decision and I respect that too.

“Their impact on the game and on everything in women’s football in England – but also further than England and abroad – is just incredible.

“We are all so proud of them and so thankful for what they have brought to the game and I just hope that they stick with the game in some kind of other roles.”

Along with MacIver, the other four players returning to the England squad for the next two fixtures are Jordan Nobbs, who was ruled out of EUROs contention due to injury, Katie Zelem, who had been on the standby list, and youngsters Ebony Salmon and Lauren James.

For Salmon, she has one cap to her name and was included in Wiegman’s first squad as England head coach in September 2021. The 21-year-old then linked up with Mo Marley’s Under-23s and has scored eight goals in as many games for Houston Dash since leaving Racing Louisville.

“She moved to Houston Dash and has done so well there. She is just a real goalscorer and she has shown that over the summer, so we really want to see where she is at now.

“Last year she came in too and she just needed some more time. We are a year further now and she has done so well so we really want to give her a chance and show where she is at with our team.”

James, whose older brother Reece plays for the men’s senior team, is uncapped but has represented England at Under-17 and Under-19 levels and was part of a senior team training camp in November 2020.

Wiegman added: "We have been following her for a long time, both since I have come in and also my former colleagues too.

“She didn’t play that much [for Chelsea last season] but she did play some and we know she is a very talented player.

“She did work over the summer and had very good preparation [to this season] with Chelsea, playing minutes, so we want to give her a chance to show what she can do with the national team.”

England are back in action on Saturday 3 September when they travel to Austria, knowing that a point will be enough to secure qualification for next year’s FIFA World Cup in Australia and New Zealand.

Austria have proven a tough nut to crack for the Lionesses, with Wiegman’s side edging two 1-0 wins in the last year, but England head into the clash with a 100 per cent record in their eight qualification matches so far.

Should Austria be victorious, the Lionesses will have another chance to top the group and secure World Cup qualification when they welcome Luxembourg to Stoke City on Tuesday 6 September, with the runners-up then heading for the play-offs.

Wiegman said: “We have very important games and with the Austria game, it is a really important one because we can qualify for the World Cup and it will be a really tough game, which they have shown during the EUROs but also in our first qualification match.

“What we have tried to do is have balance in the squad with experience and some youngsters in too, which is why we have made these choices.”