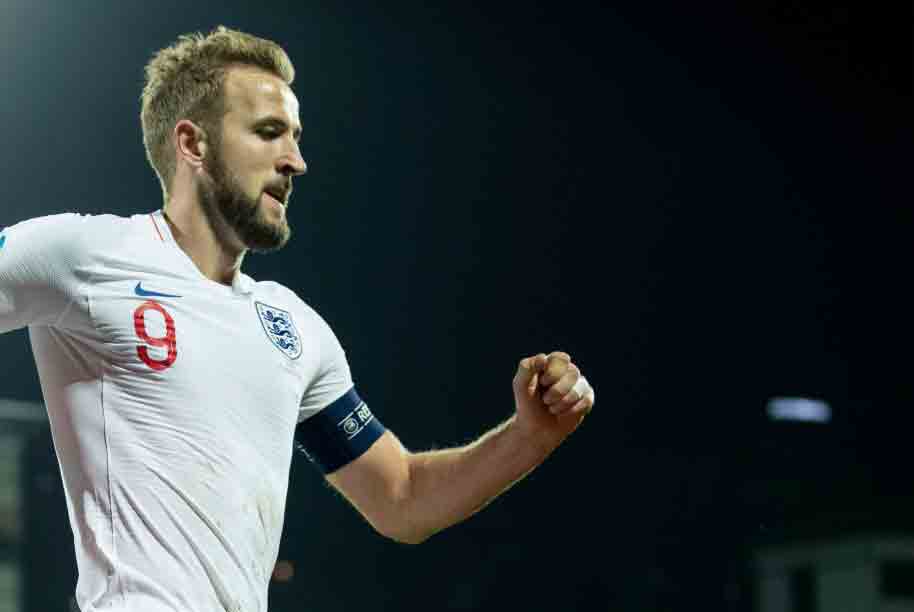 Bio Stats
I dreamed of this as a kid, and it's all been a bit of a blur. To captain my country is such a big honour for me

England’s striking talisman and captain has barely looked back since the moment he scored his first senior goal, just seconds into his debut as a Wembley substitute against Lithuania in March 2015.

Kane was named as Gareth Southgate's skipper ahead of the 2018 World Cup, having proved to be a vital part of the team both on and off the pitch since the manager first took charge in October 2016.

And he more than repaid the faith in Russia by helping to lead the Three Lions to the semi-finals and also bagging the Golden Boot award as top scorer with six goals at the competition.

Kane has continued to lead the line for England with aplomb, helping his country to a third-place finish in the inaugural UEFA Nations League in 2019 and scoring 12 goals in eight games during qualification for EURO 2020.

For one of the first times in his international career, Kane was called into question by some at the start of EURO 2020 when he did not score in the group stages. But the captain responded in impressive fashion during the knock-out matches, with four goals in three games against Germany, Ukraine and Denmark to help England reach a first major final since 1966.

Kane's remarkable record continued during World Cup qualifying, as he scored ten goals in his six games following EURO 2020. His exceptional performance against Andorra resulted in a first-half hat-trick and he followed that up with another four in the opening 45 minutes against San Marino.

Those goals meant he became the first England player ever to score 13 goals in a calendar year and moved him up to joint third in the all-time scoring charts for the Three Lions, alongside Gary Lineker, with the leader Wayne Rooney then only five ahead.

Kane had previously worked alongside Southgate was he was MU21s head coach, while the striker was still working hard for a chance to impress with Spurs, having come through the north London club's academy ranks.

The Chingford native had always shown an eye for goal in the formative years of his career, whether that was during his appearances with various Young Lions’ teams or when out on loan with the likes of Leyton Orient and Millwall.

He first came into the international reckoning with the MU17s in the 2009-10 season, when he helped John Peacock's Young Lions qualify for the U17 EURO Finals after a debut in the Elite Round games on home soil.

However, injury ruled him out of the Finals in Liechtenstein which saw England go on to lift the title thanks to a win over France in the decider.

From there, he moved into the MU19s reckoning under the stewardship of Noel Blake and was instrumental as that group went on to reach the U19 EURO semi-final in Estonia in 2012, thus qualifying for the FIFA U20 World Cup in Turkey the following summer which was another tournament experience to add to his growing list.

A strong all-rounder with an outstanding work ethic, the east-Londoner is clinical with either foot and scores his share of headers, as well as an ability to hold the ball up and bring others into play.

Harry Kane couldn't be prouder of the England players

Harry Kane on Rainbow Laces, Jake Daniels and how more needs to be done

Southgate hails all the players who contributed to unforgettable 2021

Another 'perfect night' for Harry

Another 'perfect night' for Harry

'Ready for the next one'

The Three Lions skipper sat down to share the memories and emotions from his debut, his best goals, playing in the World Cup, becoming captain and his aspirations for the future.