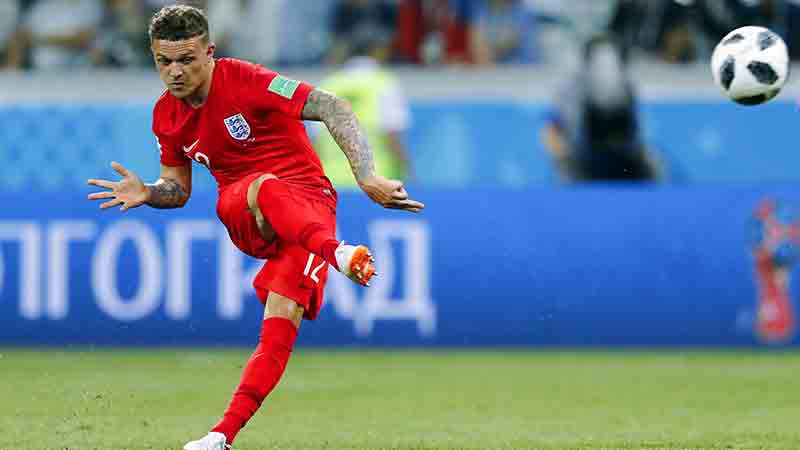 "This England team now with the relentlessness and digging in for each other, they're a pleasure to play with."

The experienced defender encompasses everything required of the modern full-back, with a tigerish tenacity in the tackle, electric pace and ability to provide crosses and, ultimately, assists.

Born and raised in Bury, Lancashire, Trippier started out with Manchester City where he won the FA Youth Cup in 2008 and was also an England regular at youth level.

He was part of the MU19s team which reached the Euro Final of 2009 in Ukraine and also played for the MU20s in the 2009 World Cup in Egypt, as well as for the MU21s under Stuart Pearce the following year.

After finding opportunities hard to come by at City, he made the short trip to Burnley where regular first-team football under the likes of Eddie Howe and Sean Dyche accelerated his progression as he helped the Clarets into the Premier League in 2014.

A switch to Tottenham Hotspur followed and after becoming a regular for the Londoners under Mauricio Pochettino, he progressed into the England senior squad when he made his senior debut after playing against France in Paris in June 2017.

Fast-forward a year and Trippier was a world-famous face following his displays at the 2018 World Cup in Russia, where his performances at right-back earned him a place in the team of the tournament.

Providing a string of assists with his marauding runs forward on the right, his stunning free-kick in the semi-final against Croatia had the nation dreaming before suffering extra-time heartbreak.

In 2019, Trippier broadened his horizons with a move abroad to Atletico Madrid, seamlessly fitting into Diego Simeone's squad both in La Liga and the Champions League and earning a first career title with Atleti in May 2021, while also remaining a regular in the England set-up.

Kieran Trippier showcases his set-piece technique with this quick tutorial