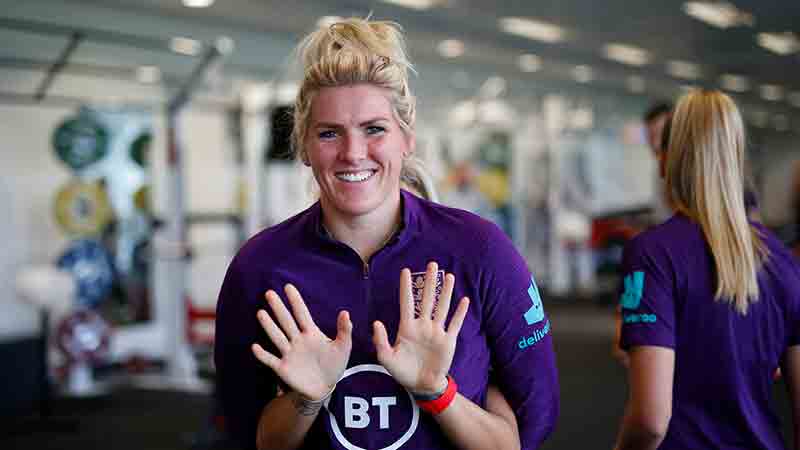 The defensive pillar upon which England built their EURO 2022 title success around, Millie was one of the figureheads of the summer of 2022 as part of the history-making Lionesses squad.

One of the most experienced members of Sarina Wiegman's squad due to her reliability and presence at the back, she formed a fluid partnership with Leah Williamson and started all six games at the finals on home turf.

Going back to her breakthrough appearances, such was Bright’s immediate impact in an England shirt, she was the only player to start every match at EURO 2017 – despite making her debut just ten months earlier.

Her Lionesses bow came in Belgium, when she replaced Karen Carney in midfield, but it is in the backline where she has shone for both club and country.

Bright struck up a fantastic centre-back relationship with Steph Houghton, with the pair racking up 12 clean sheets in the first 20 matches they started next to each other.

On the domestic front, after starting her career with Doncaster Rovers Belles, Bright moved to Chelsea in 2015 and has achieved great success, winning the BWSL title four times, the Women’s FA Cup on three occasions and reaching the final of the UEFA Champions League in 2021, just to name a few of the achievements.

Bright has become an integral part of the England side due to her impressive defensive qualities but in the Arnold Clark Cup in 2022 she showed she was a threat at the other end, finishing the inaugural competition as joint top goalscorer.

Her impressive 2022 continued when she was named vice-captain to Leah Williamson for the home EURO 2022.

Find out when you can see Millie in action for Chelsea in the Barclays Women's Super League and how to get tickets!

'It's been an emotional rollercoaster...but we showed our character'

Lionesses pair Millie Bright and Rachel Daly look back at some of their video clips...