Ebony Salmon: The goal was always to earn an England recall 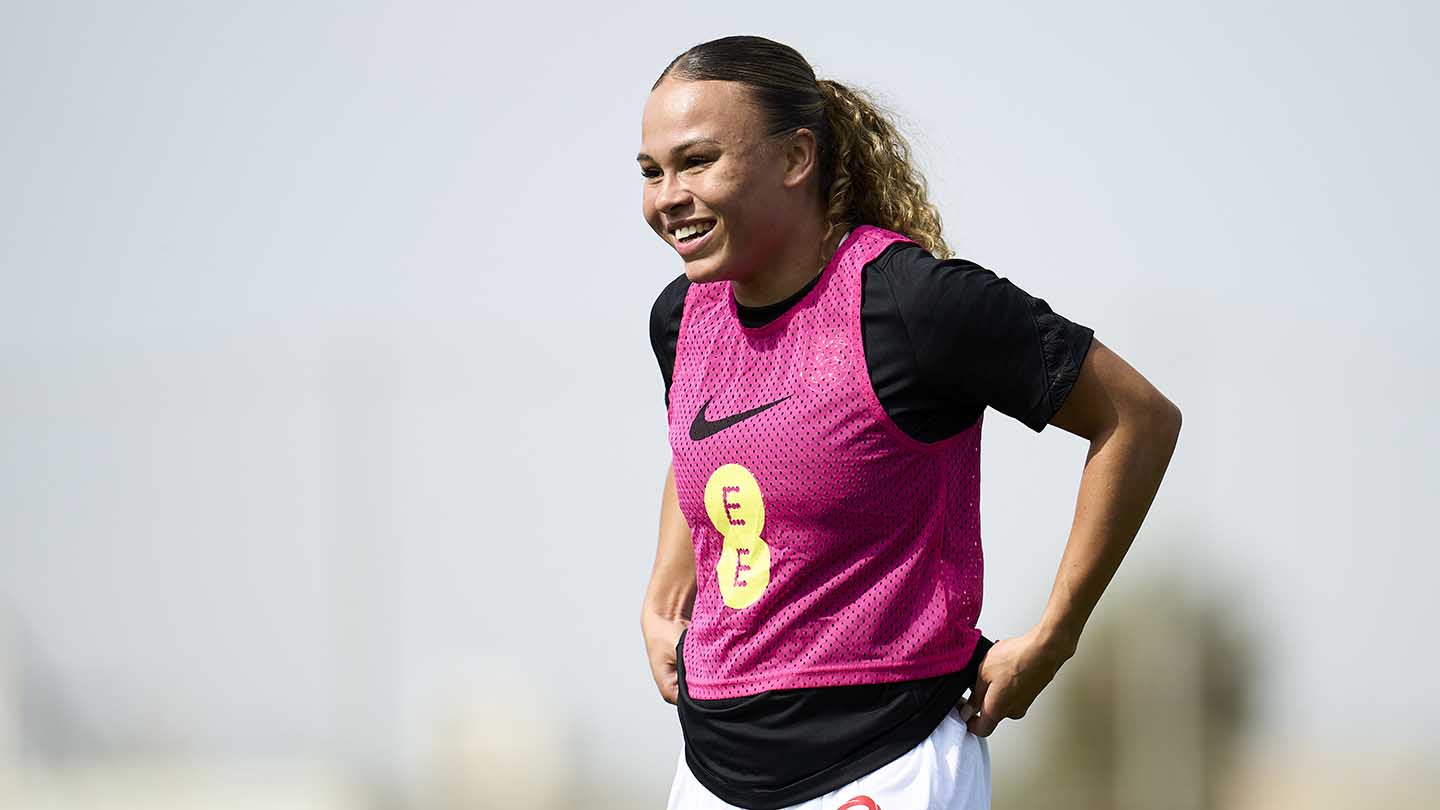 Ebony Salmon has had to bide her time but she is back in the England squad and is among the group of strikers hoping to help fill the void left by Ellen White.

Salmon was included in Sarina Wiegman’s first England squad in September 2021 but at the end of the camp, the head coach provided the striker with some areas of her game to work on if she was to carry on being selected.

The former Bristol City star subsequently lost her place in the Racing Louisville team, meaning a recall for the Lionesses became increasingly unlikely.

A move to fellow NWSL side Houston Dash, where Rachel Daly was playing until this summer, has paid off for Salmon though.

The 21-year-old has scored eight goals in nine matches since moving to Bayou City, meaning that since July 16 she has outscored seven NWSL clubs in that time frame.

While Salmon was scoring regularly for Houston, it was announced England’s record goalscorer White had retired from all football, meaning that a spot opened up in Wiegman’s squad.

So Salmon’s impressive performances for the Dash earned her a recall, meaning she has joined the likes of Alessia Russo and Bethany England in the squad.

Salmon said: “At the end of that first camp [in September 2021], Sarina and I spoke and she gave me some feedback to work on, what I needed to improve on and what would help me keep getting call-ups.

“The main thing that stopped me from being able to get called up was that I was not involved at my club – that is a big part. If you are not playing for your club then you are not going to be ready for international football.

When Wiegman arrived last year, she was keen to see the reintroduction of England women’s under-23s team, with the hugely respected Mo Marley leading the side.

Salmon was a regular in the squad and often captained the team, like she would in the England youth sides, meaning Wiegman and her coaching staff were able to monitor Salmon and the country’s next generation of talent closely at St. George’s Park.

The striker said: “The seniors is obviously a step up from the Under-23s but even international football generally is completely different to club football, so to get that exposure with the Under-23s and be around the girls who are really good players while facing top teams was obviously really good. And just being in the England set-up and in the Pathway so that if you do get called up to the Seniors then it is not as much of a jump compared to if you had not been in a camp for more than a year.”

Salmon grew up in Kingswinford in the West Midlands, where she would play football alongside her two older brothers, Leon and Levi.

The budding footballer played for grassroots side Gornal Colts’ boys’ team until the age of 14, when she joined Aston Villa’s academy.

After four years at Villa, there was a short spell at Manchester United, where she spent much of the time on loan at Sheffield United, before a hugely successful couple of seasons at Bristol City.

The teenager’s performances in the Barclays Women’s Super League earned a first senior England call-up and in February 2021 she was given her debut by Hege Riise, coming on as a late substitute in the 6-0 win over Northern Ireland.

Salmon had been top scorer for Racing Louisville when Wiegman called her up for the head coach’s maiden England squad, with five goals in 16 matches, and after a frustrating spell, has found her shooting boots once again, averaging a goal every 95 minutes for the Dash.

Salmon said: “It has been a really good start for me. I was obviously frustrated not to be playing in the first half of the season at Louisville but that is in the past and I had to forget about that half of the season and go to Houston to show people what I could do, prove them wrong and I think I have done that.

“The team is in a really good place in the league at the moment and I think we have to just keep on pushing. That is the main thing: getting success as an individual but also success as a team is really important too.”

Salmon had to settle for a place on the bench during Saturday’s 2-0 win over Austria, which was not a surprise considering the performances of Russo during UEFA Women's EURO 2022.

But Salmon and England, who has scored nine goals in 20 outings for the Lionesses, will be hoping they can challenge Russo for the No.9 spot following White’s retirement.

Salmon said: “I trained with Ellen on a couple of camps and have played against her and she did really big things for the women’s game. She is a big inspiration to a lot of players, including myself.

“What she has done by becoming the all-time record goalscorer is amazing and for her to be able to go out on such a high note is really good for her. Whatever the reasons behind her decision to retire, she could not have gone out on a better note than winning the EUROs.

“She has done so much for women’s football and younger players like me are going to feel the benefits of that going forward.”

She continued: “I guess there is a huge opportunity there now because Ellen secured the number nine spot for several years and I think that whilst there was competition, she was the one performing, so now it opens the door because no one has secured the spot yet and it gives opportunities to the people who are here now and those looking to come in to try to get that spot and secure the number one spot up front.”

Goals from Russo and Nikita Parris on Saturday helped the Lionesses continue their 100 per cent record in World Cup qualifying and secure their place in the tournament next summer.

It means Tuesday’s final qualifier with Luxembourg is likely to see Wiegman make changes to her starting XI and could provide opportunities to the likes of England and Salmon as they look to book a spot on the plane to Australia and New Zealand.

Salmon said: “I am always trying to go day by day and take it step by step, working on what I need to work on and improve game by game. But I think having a major tournament in your sights is a big thing and having something like that to aim for pushes you a little harder and gives you more motivation to work hard and do the things that you really need to do.”

Find grassroots football near you